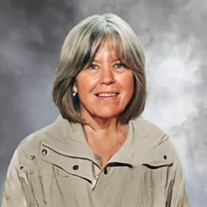 Terry “Sue” Alexander Kidd was born on December 29, 1947 in Waco, Texas to Basil Jefferson Alexander and Frances Marie (McNutt) Alexander. She died on Sunday, May 2, 2021 at her home in Owasso, Oklahoma at the age of 73 years. Sue was raised and educated in San Angelo, Texas where she graduated with the Central High School Class of 1966. She was married on March 2, 1971 in Ardmore, Oklahoma to Robert “Bob” Benjamin Kidd. Sue spent most of her working life in the home raising her 3 daughters. She enjoyed a variety of past times such as taking trips to Disney World, going to casinos, traveling to Las Vegas, attending family gatherings, and most of all she enjoyed spending time with her grandchildren. Those she leaves behind who hold many cherished memories include: 3 Children; Renee Robins and husband John Amy Wright and husband James Stacie McCormick and husband Don 6 Grandchildren; Shawna, Ashley, Kristen, Lisa, Allison, and Cameron 8 Great Grandchildren; Hayden, Claire, Chloe, Kyman, Piper, Tessa, Tara, and Ezra 5 Siblings; Nancy Ramirez and husband Frank Joe Alexander and wife Angela Gary Alexandra and Ronda John Alexander and wife Brenda Roy Alexander and wife Pam She was preceded in death by her parents, Basil and Frances, and her husband, Bob. Visitation will be held 4:00 p.m. to 6:00 p.m. on Wednesday, May 5, 2021 at Mowery Funeral Service in Owasso. Funeral service will be held 11:00 a.m. on Thursday, May 6, 2021 at the Mowery Funeral Service Chapel with Chaplain Tom Schwartz officiating. Graveside service will be held 2:30 p.m. at Olympus Cemetery in Grove, Oklahoma. In lieu of flowers, the family requests memorial donations be made in Sue’s memory to Cura Hospice, 4510 E. 31st. St., Tulsa, OK 74135. Arrangements and services were entrusted to Mowery Funeral Service.

The family of Terry "Sue" Alexander Kidd created this Life Tributes page to make it easy to share your memories.

Send flowers to the Kidd family.