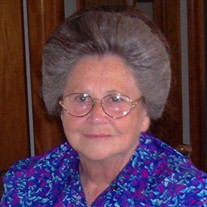 Thelma Lea Brown was born October 2, 1933, in Martha, Oklahoma, to Charlie Elijah Winters and Effie Lurlene (Southall) Winters. She passed from this life Thursday, March 15, 2018 in Owasso, Oklahoma, at the age of 84 years. Thelma was raised and educated in Southwestern, Oklahoma and graduated with the Blair High School Class of 1952 in Blair, Oklahoma. She was married October 9, 1954 in Wellington, Texas to Cleo William Brown. Thelma and Cleo owned and operated Discount Feed Store in Tulsa, Oklahoma for over 40 years. Thelma was a faithful member of Trinity Holiness Assembly of God Church in Owasso for over 35 years. She had more recently attended Verdigris Assembly of God Church in Verdigris, Oklahoma with family, due to some health issues. In her spare time Thelma enjoyed quilting and volunteering as a sponsor for the church youth camps, but most of all she loved her children and grandchildren. Her family said she was a great cook and would also show her love through her cooking, making everyone’s favorite meal for their birthday. Those she leaves behind who hold many cherished memories include: 3 Children; Bonita Homady and husband Donald, of Broken Arrow, Oklahoma Rodney Brown and wife Sheryl, of Verdigris, Oklahoma Christy McCrate and husband Tim, of Pryor, Oklahoma 10 Grandchildren and 5 Great Grandchildren Siblings; Jerry Winters and wife Mary, of Kellyville, Oklahoma Gwen Clark, of Duncan, Oklahoma James Winters and wife Sharon, of Choctaw, Oklahoma She was preceded in death by her parents, Charlie and Effie, husband, Cleo, 2 Brothers, Charles and Robert, 1 Sister, Brenda, and 1 son, David. Visitation will be held from 2:00 p.m. to 5:00 p.m. Sunday, March 18, 2018 at Mowery Funeral Service. Funeral service will be held 10:00 a.m. Monday, March 19, 2018 at the Mowery Funeral Service Chapel in Owasso with Reverend Michael Able officiating. Interment will follow at Rose Hill Memorial Park in Tulsa, Oklahoma. Arrangements and services were entrusted to Mowery Funeral Service of Owasso.

Thelma Lea Brown was born October 2, 1933, in Martha, Oklahoma, to Charlie Elijah Winters and Effie Lurlene (Southall) Winters. She passed from this life Thursday, March 15, 2018 in Owasso, Oklahoma, at the age of 84 years. Thelma was raised... View Obituary & Service Information

The family of Thelma Lea Brown created this Life Tributes page to make it easy to share your memories.

Send flowers to the Brown family.