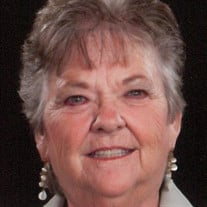 Thelma Colene Harris was born June 11, 1937, in Mullinsville, Kansas, to William Joseph and Elva Belle Summers Clifford. She died June 17, 2019, in Bixby, Oklahoma, at the age of 82 years. Colene was reared and educated in Pawhuska, Oklahoma, and graduated with the Pawhuska High School Class of 1955. She was married May 11, 1955, in Shidler, Oklahoma to Elgin Harris. They moved to the Collinsville, Oklahoma, on Thanksgiving of 1975. Colene worked various jobs but primarily was a homemaker caring for her family. She was a longtime faithful member of the Owasso First United Methodist Church. She enjoyed a variety of pastimes including knitting and crocheting. She also loved to spend time in her garden and canning. Colene was also a sports fan, going to her family’s sporting events, especially her son Vic and the grandkids. She particularly enjoyed her role of “Gigi” to the grandchildren. Those she leaves behind who hold many cherished memories include: Her son and daughter-in-law; Vic and Becky Harris, of Bixby, Oklahoma Grandchildren; Nate Harris and wife Sara, of Yukon, Oklahoma Chad Harris and Ashley Dobson, of Broken Arrow, Oklahoma Amy Gilchrist and husband Josh, of Glenpool, Oklahoma Great grandchildren; Colson Harris, Isabelle Harris, and Cambryn Harris Brother; Ralph Clifford and wife Betty, of Joplin, Missouri Sister; Kay Deyo and husband Don, of Colorado Springs, Colorado Brother; Eldon Clifford, of Las Vegas, Nevada She was preceded in death by her parents, her husband of over 61 years, Elgin, and nine siblings. Visitation will be held from 4:00 p.m. to 8:00 p.m. Thursday, June 20, 2019, at Mowery Funeral Service in Owasso. Funeral service will be held 1:00 p.m. Friday, June 21, 2019, at the Mowery Funeral Service Chapel in Owasso with Pastor Larry DeLay officiating. Committal service and interment will follow at Floral Haven Memorial Gardens in Broken Arrow, Oklahoma. The family requests memorial contributions be made to the Alzheimer’s Association, 2448 East 81st Street, Suite 300, Tulsa, Oklahoma, 74137, in memory of Colene’s husband Elgin Harris. Arrangements and services were entrusted to Mowery Funeral Service of Owasso. www.moweryfs.com

Thelma Colene Harris was born June 11, 1937, in Mullinsville, Kansas, to William Joseph and Elva Belle Summers Clifford. She died June 17, 2019, in Bixby, Oklahoma, at the age of 82 years. Colene was reared and educated in Pawhuska, Oklahoma,... View Obituary & Service Information

The family of Thelma Colene Harris created this Life Tributes page to make it easy to share your memories.

Send flowers to the Harris family.