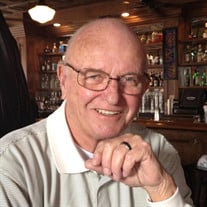 Thomas Matthew Rikkola Jr. was born on November 19th 1939 in Quincy, Massachusetts to Thomas Matthew Rikkola and Margaret Jennie “Michael” Rikkola. He died on Sunday August 16th 2020 in Owasso, Oklahoma at the age of 80. Tom was a graduate of A.B. Davis High School, class of 1957, in Mt. Vernon, New York. He graduated from the Academy of Aeronautics at La Guardia International Airport in New York. Tom served his country honorably in The United States Navy. He was married in Meridian, Mississippi to Faye (McLelland) Rikkola. Tom was employed as a maintenance crew chief with American Airlines in Tulsa, Oklahoma for 36 years. He was active in the Owasso community, and served as a volunteer and fire chief of the Owasso Fire Department. He was also a major participant in the development of the Bailey Ranch Golf Course, and continued volunteer service at the course for many years. Tom was a devoted family man and an avid golfer. He was preceded in death by his parents, Thomas and Margaret “Peg” and wife Faye. He is survived by his brothers Roger RIkkola, of Oro Valley, AZ and David Rikkola and wife Christine of Mendham, NJ. Tom, known as Papa to his family, is also mourned by: 4 daughters: Stacie Reeves and husband Rod of North Myrtle Beach, SC, Jamie Rikkola of Owasso, OK, Leslie Farabee and husband Matt of Owasso, OK and Jennie Rikkola of Greensboro, NC. 10 grandchildren: Brandon Reeves and wife Jessica, Ethan Rikkola, Jessica Hampton, Logan Reeves, Benjamin Hampton, Mason Farabee and wife Virginia, Taylor Prince, Liddie Farabee, Cloie Prince, and Gavin Prince. 4 great-grandchildren: Noah, Payton, MacKenzie, and Evie Faye. Following a private graveside service, family will be greeting friends at the Bailey Ranch Golf Clubhouse between the hours of 12 noon to 2pm on Friday, August 21st 2020. Masks and social distancing will be required. Memorials or donations may be made to St. Jude’s Children’s Research Hospital, which Tom and Faye supported for many years.

The family of Thomas Matthew Rikkola Jr. created this Life Tributes page to make it easy to share your memories.

Send flowers to the Rikkola family.