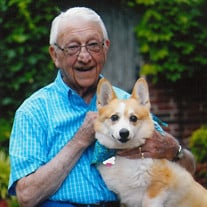 Thomas William VanCura was born August 8, 1924, in Sherwin Junction, Kansas, to Joseph G. and Grace Estella Farney VanCura. He died Friday, November 2, 2018, in Owasso, Oklahoma, at the age of 94 years. Tom completed his secondary education in Columbus, Kansas, and graduated in 1942 from Columbus High School. He was married August 11, 1945, in Columbus to Peggy Guy. Tom spent most of his working life as a homebuilder and owner of Van Construction Company. He was a 32nd Degree Mason with the Masonic Lodge and was also a member of the Elk’s Club. He always wanted to continue learning, even into his senior years. He had taken a wide variety of classes and training such as welding, cooking, and upholstery. He enjoyed a variety of pastimes including fishing, hunting, clock repair, and cane building. Those he leaves behind who hold many cherished memories include: Two daughters; Suette Parker and husband Steve Denise Woods and husband Mike, all of Owasso Granddaughter; Michele Banks and husband Cody, of Owasso Great grandchildren; Catie and Cole Banks He was preceded in death by his parents, his wife Peggy, grandson, Eric Woods, and one brother one sister. Funeral service will be 2:00 p.m. Wednesday, November 7, 2018, at the Mowery Funeral Service Chapel in Owasso with Steve Baggett officiating. The family requests memorial contributions be made to the Little People of American (OKLPA), 9700 Eastblake Place, Yukon, Oklahoma, 73099. Arrangements and services were entrusted to Mowery Funeral Service of Owasso. www.moweryfs.com

The family of Thomas William VanCura created this Life Tributes page to make it easy to share your memories.

Send flowers to the VanCura family.