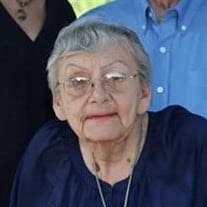 Tierra Jeanne Murr was born October 26, 1928, in Okmulgee, Oklahoma, to Luther Irving and Ernestine Thompson Baker. She died Saturday, January 5, 2019, in Owasso, Oklahoma, at the age of 90 years. Tierra was reared and educated in Okmulgee and was a graduate of Okmulgee High School where she was first chair clarinet in the band. She continued her education in Los Angeles, California, at Life Bible College. It was there she would meet and marry her husband Kenneth Murr on June 10, 1950. They moved to Owasso, Oklahoma, in 1969 and where they have made their home since that time. Tierra spent most of her working life as a homemaker and caring for her family. She enjoyed a variety of pastime including raising and showing her Paints, her beloved horses. She was also a very talented artist and enjoyed painting and wood carvings. Those she leaves behind who hold many cherished memories include: Her husband of over 68 years; Kenneth, of the home Daughter; Keli Gross and husband Doug, of Owasso Son; Jeff Murr Four grandchildren; ChiAnn Stevens and husband Michael, of Bernice, Oklahoma Kristen Brown, of Skiatook, Oklahoma Steven Gross and wife Jen, of Apex, North Carolina Riley Murr, of Stillwater, Oklahoma Six great grandchildren Sister; Ann Ingle, of Del City, Oklahoma She was preceded in death by her parents. Funeral service will be held 2:00 p.m. Thursday, January 10, 2019, at Christ’s Church of Owasso with Pastor David Payne officiating. Serving as casket bearers will be Steven Gross, Vernon White, Ken Dixon, and Steven Bozworth. Honorary casket bearers will be Bill Breese and Bill Farley. Graveside and interment will be held 1:00 p.m. Friday, January 11, 2019, at Rolla Cemetery in Rolla, Missouri. Arrangements and services were entrusted to Mowery Funeral Service of Owasso

Tierra Jeanne Murr was born October 26, 1928, in Okmulgee, Oklahoma, to Luther Irving and Ernestine Thompson Baker. She died Saturday, January 5, 2019, in Owasso, Oklahoma, at the age of 90 years. Tierra was reared and educated in Okmulgee... View Obituary & Service Information

The family of Tierra Jeanne Murr created this Life Tributes page to make it easy to share your memories.

Send flowers to the Murr family.