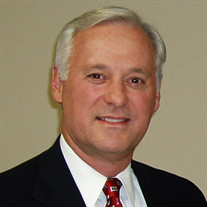 Dr. Timothy Ray Jenney, 69, passed away peacefully in his home in Owasso, OK, on April 4, 2022 in the presence of his loving wife Denise Vaniadis Jenney and his children. Remembering this man of wit, humor and determination are his daughter Theresa Dyke (Pete), son Tim Jenney (Hillary), son Jeff Jenney (Stephanie), and their mother Becki Jenney. Other survivors include his brother Peter Jenney; grandchildren Maddie, Becky, and Max Dyke; Parker, Emerson and Holly Jenney; and Ethan and Justin Jenney. Tim was a native of Battle Creek, MI. As a high school athlete he was a member of both the football team and the wrestling squad and served as co-captain for each of these teams. His competitive spirit and willingness to take risks were fostered during this time of his life. He would later carry these traits into his professional life. After high school Tim went on to earn a BA in Education from Michigan State University, an MA in Educational Leadership from Western Michigan University and a PhD in Educational Administration from Michigan State University. Later, when he was a seasoned school superintendent, he would decide to sharpen his business acumen by earning an MBA from the College of William and Mary. Public education became Tim’s chosen career path because he believed education was often many children’s best hope. His commitment to students, combined with his natural inclination to blaze trails on their behalf, earned him a reputation as a change agent. It was a reputation that would stay with him throughout his career. He began his career as a teacher in Battle Creek elementary and junior high classrooms. At the age of 26, he was appointed as an elementary principal in Hopkins, MI. When he became superintendent for Leland Public Schools in Michigan he was, at age 29, the youngest superintendent in Michigan. Tim left Michigan in 1990 to assume the post of superintendent for Union Public Schools in Tulsa, OK. During his tenure he reconfigured the grade structure to provide for a grade 6/7 building and a single grade 8th grade building. He led a successful bond effort that resulted in a new 6/7 grade complex. He also led efforts to strengthen the student leadership program for the district, resulting in securing the National Association of Student Councils annual conference for Union High School. In 1996, he was hired to lead Virginia Beach City Public Schools, which at the time was the second largest school division in Virginia. Tim was first tasked with righting the school system’s financial ship as it had suffered a $12.5 million deficit. He did so efficiently and expeditiously. It was in this school system that Tim’s renown as a change agent would be solidified. He literally changed the landscape of Virginia Beach City Public Schools (VBCPS) for the better. Under his leadership, VBCPS opened a full-time gifted elementary school; forged a partnership with Tidewater Community College to build an Advanced Technology Center; and established a thriving high school academy system which included a Legal Studies Academy; a Technology Academy; a Global Studies Academy; a Visual and Performing Arts Academy; and a Health Sciences Academy. He also led a comprehensive capital improvement program that involved the building or renovation of 26 schools; engineered the start-up of a distance learning program that helped ensure high school students across the division would have access to the courses they needed; and directed the effort to put fiber optic cable into the ground resulting in VBCPS having, at the time, the fastest wide area network in the state. He also advocated for the construction of Renaissance Academy, an alternative school, and made sure that the building would include the Princess Anne County Training School/Union Kempsville High School Museum, which was a secondary school for African American children during the time of segregation. He felt strongly that this was an important story in the city’s history and the contributions of those students and teachers had to be saluted. In 2006 Tim Jenney left Virginia to assume the post of superintendent of the Fort Bend Independent Schools District in Sugar Land, Texas. He addressed issues of rapid growth, leading bond issues and construction for 14 schools; established an early childhood education center; oversaw the creation of a district accountability system; ensured the start-up of a comprehensive character education program; and created an Office of Safe and Secure Schools, which ensured that this large district would provide solutions to campus security, gang-related behaviors, attendance and truancy and would also operate within a framework of emergency management protocols. But life eventually changed for the change agent when he was diagnosed with Parkinson’s Disease. He valiantly fought the debilitating effects of his affliction. He created fine pieces of furniture in his woodworking shop; participated in Rock Steady Boxing for Parkinsons; attended church and Bible studies; and visited his children and grandchildren. We take comfort in this single truth: Thousands and thousands of children have benefitted from his legacy and will continue to do so for years to come. His was indeed a life well lived. Tim’s family will hold a private gathering at a later time. If you desire to make a tax deductible donation in Tim’s memory, please consider these: American Parkinson Disease Assoc – Okla Chapter PO Box 3113 Broken Arrow, OK 74013 Seasons Hospice 6532 E 71st Tulsa, OK 74133

Dr. Timothy Ray Jenney, 69, passed away peacefully in his home in Owasso, OK, on April 4, 2022 in the presence of his loving wife Denise Vaniadis Jenney and his children. Remembering this man of wit, humor and determination are his daughter... View Obituary & Service Information

The family of Timothy Ray Jenney created this Life Tributes page to make it easy to share your memories.

Dr. Timothy Ray Jenney, 69, passed away peacefully in his home...

Send flowers to the Jenney family.