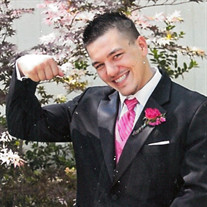 Timothy “Tim” Michael Murphy was born December 28, 1988 in Elgin, Illinois to Robert Kevin Murphy Sr. and Carrie Anne Breon. He passed from this life on Sunday, October 14, 2018, at home in the arms of his wife at the age of 29 years. Tim was raised and educated in Sperry, Oklahoma and graduated with the Sperry High School Class of 2007. After high school he spent two years at Oklahoma State University where he studied Veterinarian Medicine. Tim was married on April 30, 2011 in Tulsa, Oklahoma to Stephanie Lynn (Reed) Murphy. He spent most of his working life as a truck driver for Budweiser. Tim and Stephanie have faithfully attended Life Church in Owasso for the past 5 years. He had a variety of past times such as lifting weights, rescuing animals, playing football, and watching his beloved Oklahoma State Cowboys, but most of all Tim was a family man and always put his family first. Those he leaves behind who hold many cherished memories include: Wife; Stephanie Murphy, of Collinsville Mother; Carrie Keiffer and husband Jeff, of Sperry Father; Robert Murphy Sr. and wife Patricia, of Inola 3 Sons; Taylor Pate and wife Taylor, of Collinsville Hunter Pate, of Collinsville Sam Pate, of Collinsville 3 Grandchildren; Emma Rogers, of Collinsville Jaxon Rogers, of Collinsville Raylynn Pate, of Collinsville 6 Siblings; Robert Murphy Jr. and wife Cassie, of Claremore Victoria Mountjoy and husband Josh, of Claremore Ricky Massey, of Inola Samantha Medlin and husband Austin, of San Antonio, Texas Thomas Murphy, of Sperry Norine Murphy, of Inola Visitation will be held 4:00 p.m. to 8:00 p.m. on Tuesday, October 16, 2018 at the Mowery Funeral Service Chapel. Funeral Service will be held 10:00 a.m. Wednesday, October 17, 2018 at the Mowery Funeral Service Chapel with Pastor Richie Leber officiating. Interment will follow at Ridgelawn Cemetery in Collinsville, Oklahoma. In lieu of flowers the family requests that donations be made in Tim’s memory to Skiatook Paws and Claws, P.O. Box 1033, Skiatook, Oklahoma 74070. Arrangements and services were entrusted to Mowery Funeral Service of Owasso.

The family of Timothy "Tim" Michael Murphy created this Life Tributes page to make it easy to share your memories.

Send flowers to the Murphy family.