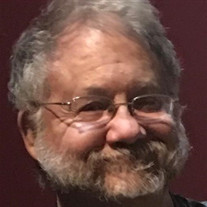 Travis Lee Warden was born July 8, 1954, in Ponca City, Oklahoma, to Arnold Elmer and Marjorie Dell Pedcock Warden. He died Monday, November 4, 2019, in Tulsa, Oklahoma, at the age of 65 years. Travis completed his secondary education in Harper, Kansas, and graduated with the Harper High School Class of 1972. He continued his education at Rogers State University in Claremore, Oklahoma, then at the University of Oklahoma, in Norman, Oklahoma, where he earned his master’s degree. He was married May 20, 1976, in Lyons, Kansas, to Cathy Long. Travis spent most of his working life as a drug and alcohol counselor and was committed to helping homeless veteran escape addiction. He worked for 12 & 12 in Tulsa as well as with Bryce House. He enjoyed a variety of pastimes including spending time on his computer and playing games on his iPad. When the opportunity arose, he loved to go ziplining and riding roller coasters. Those he leaves behind who hold many cherished memories include; His wife of over 43 years; Cathy, of the home Sister-in-law; Jean Warden, of Topeka, Kansas Nephew; Bobby Warden and wife Sierra, of San Diego, California He was preceded in death by his parents and his brother, Francis Warden. A memorial celebration will be held 5:00 p.m. Friday, November 8, 2019, at the Mowery Funeral Service Chapel in Owasso. Arrangements and services were entrusted to Mowery Funeral Service. www.moweryf.com

The family of Travis Lee Warden created this Life Tributes page to make it easy to share your memories.

Send flowers to the Warden family.