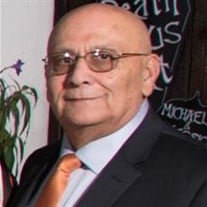 Vincent Francis “Vince” Biancuzzo was born November 25, 1949, in Niagara Falls, New York, to Francis Anthony Biancuzzo and Genevieve Elizabeth Matarrese. He died Friday, August 17, 2018, in Tulsa, Oklahoma, at the age of 68 years. Vince was reared and educated in Niagara Falls, New York, and was a graduated of Niagara Falls High School. He was a veteran of the armed forces having served his country honorably with the United States Army. He was married December 27, 2003, in Tucson, Arizona, to Helen Schettrer. They had made their home in Owasso, Oklahoma, since 2013. Vince spent most of his working life managing insurance adjusters over catastrophic events, most recently with Pacesetter Claims. He enjoyed a variety of pastimes including bowling. He also enjoyed watching his favorite televisions shows Law and Order, MASH, and the old classic movies, especially John Wayne. He was an avid sports fan and enjoyed watching his favorite teams, particularly his beloved Buffalo Bills. He was very fond of his role of Grampa to his grandchildren. Those he leaves behind who hold many cherished memories include: His wife; Helen, of the home Daughter; Elly Biancuzzo and fiancé Mike Zapf, of St. Louis, Missouri Son; Michael Biancuzzo and his wife Jessica, of Tucson, Arizona Daughter-in-law; Christina Ochoa Grandchildren; Amaris, Tayvien, and Dominic Step-children; Jacob Havird, Star Havird-Wright, and Jennifer Alford Several grandchildren and a host of other relatives and friends. He was preceded in death by his parents, and a son, Matthew Biancuzzo. Private family disposition will be held at a later date. Arrangements and services were entrusted to Mowery Funeral Service of Owasso, Oklahoma. www.moweryfs.com

The family of Vince Francis Biancuzzo created this Life Tributes page to make it easy to share your memories.

Send flowers to the Biancuzzo family.