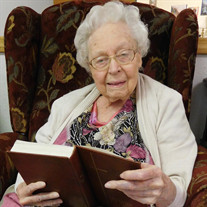 Virginia Mae (Thompson) Hodges went to be with her Lord on October 17, 2018, in Noble, Oklahoma, at the age of 94 years. She was born April 18, 1924, in Tulsa, Oklahoma, to Norman and Mabel Powell Thompson. Virginia was reared and educated in Tulsa and graduated with the Will Rogers High School Class of 1942. She continued her education attending the University of Tulsa. She was married June 1, 1944, in Los Angeles, California, to Jesse G. Hodges, three weeks before he went overseas during World War II. After his honorable discharge from military service, they lived in Tulsa and Mingo area before moving to Owasso in 1956. Virginia spent much of her working life as a homemaker and raising her three children. She was a faithful member of First Christian Church in Owasso then later A Glorious Church Fellowship in Collinsville, Oklahoma. She was active in many of the churchs’ functions as well as Tulsa County Meals on Wheels in Owasso and Tulsa County voting. Those she leaves behind who hold many cherished memories include: Three children; Ginger Martin and husband Fred, of Norman, Oklahoma Fred Hodges, of Tulsa Charles Hodges and wife Teresa, of Owasso Five grandchildren; Eric Martin and wife MaryAnn, of Norman, Oklahoma Regina Martin, of Granville, Ohio Paul Hodges, of Tulsa Jordan Hodges, of Tulsa Hillary Harmon and husband David, of Collinsville Three great grandchildren; Katie, Zuzu, and Maggie Martin Sister; Norma Thompson, of Bedford, Texas She was preceded in death by her husband and two brothers. Visitation will be held from 4:00 p.m. to 8:00 p.m. Friday, October 19, 2018, at Mowery Funeral Service in Owasso. Funeral service will be held 1:30 p.m. Saturday, October 20, 2018, at the Mowery Funeral Service Chapel in Owasso with Pastor Ben Killion officiating. Final resting place will be next to her husband at Floral Haven Memorial Gardens in Broken Arrow, Oklahoma. Arrangements and services were entrusted to Mowery Funeral Service of Owasso.

Virginia Mae (Thompson) Hodges went to be with her Lord on October 17, 2018, in Noble, Oklahoma, at the age of 94 years. She was born April 18, 1924, in Tulsa, Oklahoma, to Norman and Mabel Powell Thompson. Virginia was reared and educated... View Obituary & Service Information

The family of Virginia Mae Hodges created this Life Tributes page to make it easy to share your memories.

Virginia Mae (Thompson) Hodges went to be with her Lord on October...

Send flowers to the Hodges family.