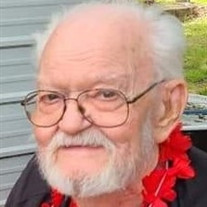 Waldean “Mack” McRevey was born February 11, 1931, in Winfield, Kansas, to Walter Earl and Bibdis Basil Fielder McRevey. He died Monday, August 16, 2021, in Owasso, Oklahoma, at the age of 90 years. He grew up in Wichita, Kansas, and Grossmont, California. Mack graduated from Grossmont High School in 1949. He participated in marching band, pep band and orchestra playing the saxophone. He met his first wife, Audrey Brooks, his Senior year of high school and was married on March 26, 1950. They too lived in both Kansas and California as their family grew into four daughters. They divorced in 1966. Mack lived and worked all over the country and world including Kansas, California, Greenland, Guam, and finally to Oklahoma in October of 1972. He began his career with Centrilift in 1972 and spent much of his working life working for this company. He retired from there in 1997. He was a faithful member of the Church of Christ in Owasso. In 1980, he met Florence Dacus of Broken Arrow, while attending meetings with the organization, Parents without Partners, and they were married on September 26, 1980. She had four children, two living outside the home and two at home. After the children completed school, they settled in Claremore, Oklahoma. His hobbies were dancing, CB Radios, and car racing running tracks in Dewey, Tulsa, and Muskogee. Mack was a member of the Claremore Elks Lodge #1230 and reached the office of Exalted Ruler and served as a Trustee for seven years. His other pastimes included spending time in the garden, working on his computer, and was an all-around Mr. Fix-it. Those he leaves behind who hold many cherished memories include: Children; Sharon Braley, Robin Banks, Judy Dailey and husband Skip, Melanie Lawson, Nickye Jenkins, Kim Morris and husband Richard, Johnnye Gayle Brown, and John Dacus and wife Sue Grandchildren; Autumn, Jesse, Christopher, Sommer, Sarah, Danny, Sandy, Dylan, Trenton, Rae Lynn, Austin, Ashley, and Dustin Great Grandchildren; Rowan, Morgan, Tony, Addyson, Miya, Ariel, Blake, Taylor, Tanner, Grayson, Randi, Jakoby, Rikki, Ramsey, Brylee, Braycen, and Bria His beloved Amazon Blue Parrot of 38 years, Okie He was preceded in death by his parents, first wife Audrey, and second wife Florence, daughter, Sharon, granddaughter, Sommer, and great grandson, Tony. Funeral service will be held 1:00 pm. Monday, August 23, 2021, at the Mowery Funeral Service Chapel in Owasso with Richard Budder officiating. Committal service and interment will follow at Floral Haven Memorial Gardens in Broken Arrow, Oklahoma. The family requests memorial contributions be made to Grace Hospice, 6218 South Lewis Avenue, Suite #1000, Tulsa, Oklahoma, 74136. Arrangements and services were entrusted to Mowery Funeral Service of Owasso. www.moweryfs.com

The family of Waldean "Mack" McRevey created this Life Tributes page to make it easy to share your memories.

Send flowers to the McRevey family.