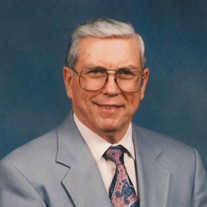 Walter Don Kerr was born February 26, 1936, in Owasso, Oklahoma, to Earl Irvin and Esther Pauline Shue Kerr. He died Friday, January 15, 2021, in Tulsa, Oklahoma, at the age of 84 years. Don went to Owasso Public Schools from 1st thru 12th grades and graduated with the Owasso High School Class of 1954. He continued his education at Connors State College in Warner, Oklahoma, where he played football for the Cowboys. He was married November 28, 1959, at the Nazarene Church in Collinsville, Oklahoma, to Shirlene Gaylord. Don was a veteran of the armed forces having served his country honorably as a Ranger with the United States Army. He also served on the Presidential Honor Guard at Arlington National Cemetery. He spent most of his working life in sales marketing with Yellow Freight Systems and Transcon Lines. Don was a faithful member of First Church in Owasso, formerly First Christian Church. He was a member of the Owasso Masonic Lodge #545. He enjoyed a wide variety of outdoor sports including fishing and hunting. He also played softball in several men’s softball leagues over the years. Those he leaves behind who hold many cherished memories include: His wife of over 61 years; Shirlene, of the home Children; Debra Kerr Cook and husband Alan Don Earl Kerr and wife Vicky, all of Owasso, Oklahoma Grandchildren; Mandy Lauck Sara Groll and husband Manny Courtney Franklin Alexandra Cook Great grandchildren; Owen Dalsing, Grady Harrison, Tate Lytle, Rian Lytle, Emma Foster, and Wesley Groll He was preceded in death by his parents, brothers, Earl Kerr and his wife Helen, Gene Kerr, sisters, Paula Stout and her husband Jack, Margie Guiling, and Sue Hale. Visitation will be held from 4:00 p.m. to 8:00 p.m. Wednesday, January 20, 2021, at Mowery Funeral Service of Owasso. Funeral service will be held 10:00 a.m. Thursday, January 21, 2021, at First Church in Owasso with Pastor Ben Killion and Pastor Matt Thomason officiating. Committal service and interment will follow at Fairview Cemetery in Owasso. The family requests memorial contributions be made to the American Heart Association, 2227 East Skelly Drive, Tulsa, Oklahoma, 74105. Arrangements and services were entrusted to Mowery Funeral Service of Owasso www.moweryfs.com

The family of Walter Don Kerr created this Life Tributes page to make it easy to share your memories.

Send flowers to the Kerr family.