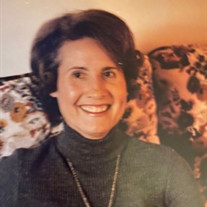 Wanda Lee Smith was born July 29, 1929, in Hominy, Oklahoma, the youngest child of Floyd R. and Fannie Elizabeth Clark Burke. She died Tuesday, August 3, 2021, in Tyler, Texas, at the age of 92 years. Wanda attended her secondary schooling Kansas, Oklahoma. She moved to Tulsa, Oklahoma, when she was a young adult. There she met and married Raymond Wilson. She and Raymond traveled throughout the United States wherever it was that Ray’s work took them. After a job was finished, they would return to the Tulsa-Owasso area until the next job began. Wanda accompanied Raymond to every job. She spent most of her life as a devoted wife and homemaker. Wanda loved her home and took great pride in keeping her home nice. She loved to bake, and typically baked biscuits for breakfast on most days. She also loved to bake desserts and always had a dessert on hand. Spending time in the kitchen cooking was her hobby. Wanda loved her pets and always had a small house dog. When her pets would die, she would always get another little dog. He dogs were her children After Raymond’s death in 1992, Wanda remained in Owasso until 2000. At that time, She met and married Charles Smith and moved to Canton, Texas. Charles passed away in 2010 and Wanda remained in Canton for several years. She later moved to a retirement home in Tyler, Texas. Wanda was preceded in death by her parents, her husbands, Raymond Wilson and Charles Smith, brothers, Thomas Burke and Clarence Burke, sisters, Verna Chapman, Opal Jordan, and Leona Pryor, four nieces, one nephew, and two great nephews. Funeral service will be held 11:00 a.m. Tuesday, August 10, 2021, at the Mowery Funeral Service Chapel in Owasso with Reverend Kevin Laufer officiating. Final resting place will be at Fairview Cemetery in Owasso. Arrangements and services were entrusted to Mowery Funeral Service. www.moweryfs.com

The family of Wanda Lee Smith created this Life Tributes page to make it easy to share your memories.