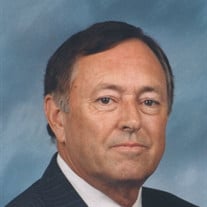 Warren Cook, 82, of Claremore, Oklahoma, transitioned to his Heavenly home on Sunday, August 2, 2021. He was at his home in Claremore surrounded by his family who will miss him greatly. Warren was born on July 9, 1929, in Shawnee, Oklahoma, to Ethel and Floyd Cook. He graduated from Dale High School then joined the United States Army Reserve serving for six years. Warren and his beautiful wife, Barbara, were married in Shawnee, Oklahoma, on October 11, 1963, and started their family in Shawnee. He worked as a homebuilder with his father for many years before beginning his career with McDonell Douglas in 1966. Warren and Barbara moved their family to Oologah, Oklahoma, in 1979, and have lived in the Rogers County area since that time. Warren loved spending time with his family. He enjoyed trips with his parents and children to the Colorado Rockies when his children were younger. Warren had a great sense of humor and enjoyed entertaining his family with his witty personality. Warren leaves behind many loved ones who hold cherished memories. Among them are his loving wife, Barbara Cook, of the home; son, Kevin Cook and wife Suzanne, of Oklahoma City; son, Keith Cook and wife, Pamela, of Claremore; daughter, Kimberly Cook and Craig Kupec, of Melbourne, Florida; son-in-law; Scott Claybrook, of Pryor, Oklahoma; brother Wayman Cook and wife Linda, of Shawnee, Oklahoma; sister, Carolyn Stuart, of San Benito, Texas; sister, Leda Glenn and husband, Dennis, of Shawnee, Oklahoma. Warren was blessed with seven grandchildren: Rachel and Ryan Cook, Dillion, Texas, and Myracle Claybrook, Davis (wife, Brittany), and Carson Cook, and two great grandchildren, Keith and Nathan Cook. He was preceded in death by his parents; daughter, Kathy Claybrook, and sisters, Phyllis Cook and Charlotte Hall. We would like to extend a heartfelt thank you to the hospice employees at Cura for their loving care and compassion. Funeral service will be 1:00 p.m. Friday, August 6, 2021, at the First Baptist Church of Talala with Pastor Lester Orwig officiating. Final resting place will be at Fairview Cemetery in Talala. Arrangements and services were entrusted to Mowery Funeral Service of Owasso. www.moweryfs.com

Warren Cook, 82, of Claremore, Oklahoma, transitioned to his Heavenly home on Sunday, August 2, 2021. He was at his home in Claremore surrounded by his family who will miss him greatly. Warren was born on July 9, 1929, in Shawnee, Oklahoma,... View Obituary & Service Information

The family of Warren Loy Cook created this Life Tributes page to make it easy to share your memories.

Warren Cook, 82, of Claremore, Oklahoma, transitioned to his...

Send flowers to the Cook family.