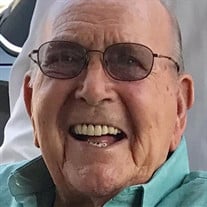 Wayne Evans Ferguson was born September 6, 1932 in Omnia, Cowley County, Kansas. He departed this life October 2, 2019. Wayne was born to Laura Mae and James Walter Ferguson. His family moved to Brushy Mountain, Oklahoma and later to Keefeton, where he attended grade school. It was his teacher that impacted his life to read books, and he continued to love to read all his life. He later graduated from Warner High School and moved to California. It was there he decided to join the Airforce. June 28, 1951 he began basic training at Langley AFB, Texas. Was later sent overseas to Japan and Korea. Wayne was in the 3750th Installation Group USAF. He was honorably discharged on June 27, 1955 at Sheppard AFB, Texas. Service Medals he received included the United Nations, Korean, National Defense, and Good Conduct. After his discharge he went back to Tulsa, Oklahoma and married Nora Toney on December 16, 1955. Wayne was an apprentice plumber for J&E Plumbing while attending Drawns Business School in Tulsa. He furthered his education at TU in Accounting. He took a job at Armour Star in Artesia, New Mexico, then they moved to Colorado, where he and Nora worked and lived for 12 years. Wayne was at Ceco Inc. as cost accountant, payroll clerk, and then treasurer of the Company. Wayne also worked in the Petro industry at Jacking and Boring while in Colorado. Wayne and Nora moved back to Oklahoma, and settled in Collinsville in 1976. He had his own Tax Accounting Business and also took a job at REC. They were members of the Church of the Nazarene in Collinsville. He retired from REC after 19 years. He continued to maintain friendships with many of his coworkers over the years. Wayne enjoyed woodworking, computer programming, playing the guitar, and working in his machine shop, but his love of reading was life-long. No matter what the circumstances have been in Wayne's life, he has always had a positive perspective and a contagious smile. Wayne resided at the Villages of Southern Hills for over 5 years. He extended his family during his stay, he sincerely appreciated the Pastor and looked forward to the teachings at Bible Study, singing Hymns and sharing. His friends there became his second family, from everyone at his Dialysis sessions to the precious ones encouraging and loving him in Physical Therapy. He was partial to a few, but greatly enjoyed and respected all of them, he loved being involved in their lives, their children and grandchildren. Wayne knew almost everyone at the Villages, and they knew him. They brightened his day, and he liked to be around them as much as possible. He was Blessed, and we are grateful, for the care and love that has been shown to him; and the special efforts of Pastor Barbara Musico for creating a history of Waynes life, one that he was hesitant to share in the past, and she presented in the Resident Spotlight. Wayne was preceeded in death by his wife of 60 years, Nora; his parents, and a brother. His survivors include his sister, Barbara Seelye of California; and many nieces and nephews.

The family of Wayne Evans Ferguson created this Life Tributes page to make it easy to share your memories.

Send flowers to the Ferguson family.