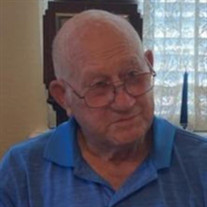 Walter “Wayne” Weaver was born on October 10, 1942, in Dumas, Texas to Virgil Afton Weaver and Mamie Faye (Calhoun) Weaver. He passed from this life on Thursday, November 4, 2021, in Owasso, Oklahoma at the age of 79 years. Wayne graduated from Channing High School Class of 1960. He moved to Owasso in 1995 and retired as manager at the Bridgestone Firestone Commercial Tire Center in Tulsa in 2005. Wayne was married on December 15, 2001, in Ramona, Oklahoma to Barbara Ann (Tucker) Weaver. He had been a faithful member of First Baptist Church in Owasso for the past 15 years. In his spare time, Wayne enjoyed a variety of past times such as fishing, hunting, and playing golf. Those he leaves behind who hold many cherished memories include: His Wife; Barbara Weaver 4 Children; Terry Weaver and wife Teresia, of Amarillo, TX Tammy Brown and husband JoeBob, of Hereford, TX Mark Priest and wife Teresa, of Dewey, OK Michael Graves, of Scranton, PA 10 Grandchildren; Chez, Tiffanie, Brandon, Brittney, Samantha, Jeremiah, Steven, Nick, Christina, and Billy 16 Great Grandchildren Sister; Mae Slankord, of Van Alstyne, TX He was preceded in death by his parents, Virgil and Mamie, two brothers, Leon and Ralph, and his sister, Margaret.

The family of Wayne Weaver created this Life Tributes page to make it easy to share your memories.

Send flowers to the Weaver family.