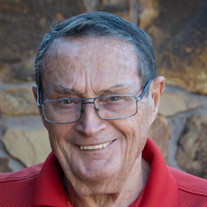 Wilbur Dale Archer was born October 17, 1934, in Bergman, Arkansas, to William Tracy and Lida Andrews Archer. He died Wednesday, April 8, 2020, in Owasso, Oklahoma, at the age of 85 years. Dale was reared and educated in Bergman and was a graduate of Bergman High School. In 1952, Dale began working for AP&L Electric in St. Charles, Missouri, when he was injured on the job with the “Brush Crew”, then began working for a local aircraft company. In 1953, he made the move to Tulsa, Oklahoma, where he began working for Unit Rigg and Equipment Company. From 1954 to 1963, He began his long career in sales in the food brokerage service, starting with L.D. Jones Food and Gerber Baby Food, working both in the Tulsa and Oklahoma City locations. Dale and Glenda Watkins Davis were married August 28, 1969, in Tulsa, Oklahoma. He worked many years with Guys, from which he retired, but began working again with Frito-Lay before finally retiring at the age of 82. Dale enjoyed a variety of pastimes and was an excellent bowler. He bowled three sanctioned “Perfect” games (score of 300) and had several perfect games in “Open” play. He never golfed professionally, but thoroughly enjoyed playing, especially with his brother Paul. At one time Dale worked on lawnmowers in his garage in Owasso and actually opened a repair shop for a time. Dale spent many hours in his garage woodworking and piddling on different projects for many years. He made numerous oak pieces, wooden toys for his grandchildren, mirror shelves for many of the Archer Clan, picture frames, bat houses, and many more items that went up for chance drawings at the annual B.O.B. Those he leaves behind who hold many cherished memories include: His wife of over 50 years; Glenda Children; Derrick Lang and wife Brandee, of Tulsa, Oklahoma Sherry Archer-Keeter and husband Larry, of Lakeview, Arkansas Terri Archer-Branon and husband Steve, of Bergman, Arkansas Alan Archer and wife Gail, of Harrison, Arkansas Tanya Davis-Beaty and husband Robert, of Gig Harbor, Washington Carla Davis-Eschbach and husband Leon, of Skiatook, Oklahoma Grandchildren; Jason Honeycutt, Shara Jordan, Rachel Combs, Melinda Smalley, Stephen Branon, Lindsey Branon, Catlin Rose Pendergraft, and Crystal Schmitt 16 Great grandchildren And a host of nieces, nephews, and other relatives and friends. He was preceded in death by his parents, sister, Glendora Theising, brothers, Robert Archer, Lenord Archer, Bill Archer, Paul Archer, and eldest daughter, Janet Archer-Curtis Visitation will be held from 4:00 p.m. to 8:00 p.m. Monday, April 13, 2020, at Mowery Funeral Service in Owasso. Final resting place will be at Ridgelawn Cemetery in Collinsville, Oklahoma. Arrangements and services were entrusted to Mowery Funeral Service of Owasso.

Wilbur Dale Archer was born October 17, 1934, in Bergman, Arkansas, to William Tracy and Lida Andrews Archer. He died Wednesday, April 8, 2020, in Owasso, Oklahoma, at the age of 85 years. Dale was reared and educated in Bergman and was a... View Obituary & Service Information

The family of Wilbur Dale Archer created this Life Tributes page to make it easy to share your memories.

Send flowers to the Archer family.