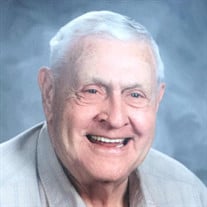 Reverend Lynn Wood was born September 15, 1931, in Stratford, Oklahoma, to John Adam and Effie Leona Hunt Wood. He passed peacefully on Friday morning, September 4, 2020, in Owasso, Oklahoma, at the age of 88 years. Lynn completed his secondary education in Ada, Oklahoma, and graduated with the Ada High School Class of 1949. He was married August 19, 1950, in Oklahoma City, Oklahoma, to Jo Ann Barber. He was ordained to the ministry in 1950 and was a faithful pastor for over 67 years. He was a veteran of the armed forces having served his country honorably with the United States Army from 1952 to 1954 during the Korean War. After his military service, Lynn pastored churches in Oklahoma, Arizona, Texas, California, and Missouri. He and Jo Ann made Owasso their home in 1997 where he served with Rejoice Church, completing his full-time ministry. Lynn also served in different capacities with the Free Will Baptist Church denomination. He served as the first Promotional Director of Oklahoma Bible College, now Randall University in Moore, Oklahoma. He also sat on several denomination boards in both state and national capacities. He loved Mexico Free Will Baptist Missions and was privileged to speak at their National Convention. He served as a board member of Standing In The Gap while living in Owasso. He enjoyed a variety of pastimes, especially spending time on the golf course. He was also known as “The Voice of Rejoice” announcing Rejoice Eagle basketball. He was particularly fond of his role as “Papa” to his grandchildren and great grandchildren. Those he leaves behind who hold many cherished memories include: Four sons; Terry Wood and wife Dianne, of Tulsa, Oklahoma Mark Wood and wife Brenda, of Jenks, Oklahoma Scott Wood and wife Pam, of Catoosa, Oklahoma Kevin Wood and wife Fran, of Collinsville, Oklahoma 11 grandchildren and 14 great grandchildren Brother; Glen Wood, of Granbury, Texas Sister-in-law; Carolyn Lee and husband Glen, of Meridian, Texas Brother-in-law; Ron Barber, of Payson, Arizona He was preceded in death by his wife, Jo Ann, his parents, and one brother, Jerry Wood. Visitation will be held from 4:00 p.m. to 8:00 p.m. Wednesday, September 9, 2020, at Mowery Funeral Service in Owasso. Funeral service will be held 2:00 p.m. Thursday, September 10, 2020, at Rejoice Church in Owasso with Reverend Jack Richey and Reverend Steve Dighton officiating. Serving as casket bearers will be Josh Wood, Allen Hood, Luke Oldham, Jeremy Roberson, Judson Chevalier, and Jacob Bishop. Final resting place will be held later at Fort Gibson National Cemetery in Fort Gibson, Oklahoma. The family requests memorial contributions be made to Woodcrest Mexico Missions, c/o Woodcrest Free Will Baptist Church, P.O. Box 1110, Catoosa, Oklahoma, 74015-1110 Arrangements and services were entrusted to Mowery Funeral Service of Owasso. www.moweryfs.com

The family of Willard Lynn Wood created this Life Tributes page to make it easy to share your memories.

Send flowers to the Wood family.