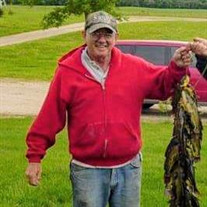 William Charles “Bill” Gingery was born May 21, 1948, in Beatrice, Nebraska, to Charles Ransom and Gretchen Anne Hauver Gingery. He died Wednesday, June 3, 2020, in Owasso, Oklahoma, at the age of 72 years. Bill was a fine athlete as a youth and enjoyed playing basketball and football, as well as running track. He completed his secondary education in Holmesville, Nebraska, and graduated with the Holmesville High School Class of 1966. He continued his education at the University of Nebraska-Lincoln, where he ultimately earned a master’s degree in Botany. Bill spent most of his working life as a food inspector with the State of Nebraska. He thoroughly enjoyed spending his time outdoors, whether it was hunting or camping, but he especially enjoyed spending time fishing. He was an avid fan of the Nebraska Cornhuskers, Kansas City Royals, and the Minnesota Twins. Those he leaves behind who hold many cherished memories include: His two sons; Wesley Gingery, of Owasso, Oklahoma Tyson Gingery, of San Diego, California Two sisters; Kathy Engel, of Covington, Louisiana Cheryl Petersen and husband Gary, of McClelland, Iowa Brother; Tom Gingery and wife Theresa, of Holmesville, Nebraska He was preceded in death by his parents. A recording of the Rosary via Mowery Funeral Service Chapel in Owasso with Father Matt LaChance officiating will be made available by Bill’s sons, for all to view online. Arrangements and services were entrusted to Mowery Funeral Service of Owasso.

The family of William Charles "Bill" Gingery created this Life Tributes page to make it easy to share your memories.

Send flowers to the Gingery family.