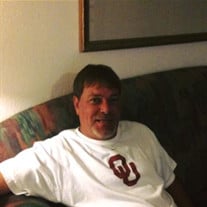 William Ezekiel “Zeke” Huff was born September 28, 1963, in Tulsa, Oklahoma. He died Wednesday, January 26, 2022, in Collinsville, Oklahoma, at the age of 58 years. Zeke was completed his education in Owasso, Oklahoma, and graduated with the Owasso High School Class of 1981. He had worked for S and T Manufacturing, but more recently had worked with Macy’s Distribution Center as a quality control operator. Zeke was married February 23, 2001, in Eureka Springs, Arkansas, to Jeannie Whiteside. They had made their home in Collinsville, Oklahoma, where Zeke became a huge fan of the Collinsville Cardinals. He was also as avid fan of Oklahoma Sooner football. He was a fan of music, especially if he was listening to the blues or rock-and-roll. All his life he loved fast cars and loved going out to the midnight races at the Tulsa Motor Speedway. Most important to Zeke in his life was his family, and especially his role as “Poppy”. Those he leaves behind who hold many cherished memories include: His wife; Jeannie, of the home Children; Jacqueline Santos and husband Jeff, of Claremore, Oklahoma Benjamin Frunk and fiancé Miranda Ware, of Collinsville, Oklahoma Dakota Huff, of Collinsville, Oklahoma Granddaughter; Meshiya Santos Sisters; Diane Chamberlain, of Collinsville, Oklahoma Shauna Brock, of Collinsville, Oklahoma He was preceded in death by his parents, Larry and Billie Huff, grandparents, Fred and Frankie Carroll, brother, Steve Chamberlain, and nephew, Brian Chamberlain. Visitation will be held from 2:00 p.m. to 5:00 p.m. Sunday, January 30, 2022, at Mowery Funeral Service in Owasso. Funeral service will be held 11:00 Monday, January 31, 2022, at the Mowery Funeral Service Chapel with Steve Mowery officiating. Serving as casket bearers will be Dakota Huff, Benjamin Frunk, Reed Coffman, JD Hardest, Steve “Bo” Chamberlain, and Brett Chamberlain. Committal service and interment will follow at Ridgelawn Cemetery in Collinsville, Oklahoma. Arrangements and services were entrusted to Mowery Funeral Service of Owasso. www.moweryfs.com

The family of William Ezekiel "Zeke" Huff created this Life Tributes page to make it easy to share your memories.

Send flowers to the Huff family.