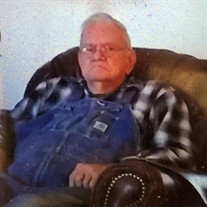 William Perry Stewart was born January 21, 1934, in Skiatook, Oklahoma, to William Perry and Bonnie Lucille Cohea Stewart. He died Thursday, September 2, 2021, in Collinsville, Oklahoma, at the age of 87 years. Bill attended school in Turley, Oklahoma, at Cherokee School. He was married February 14, 1953, in Tulsa, Oklahoma, to Mary Carolyn Schilling. He spent most of his working life as a heavy equipment operator with Belger Cartage Service. He enjoyed a variety of pastimes including throwing a line in the water fishing and working in his flower garden. He loved his dogs Zoe and Foxy. He dearly loved his wife Carolyn and always took very good care of her. Those he leaves behind who hold many cherished memories include: Children; Beverly Thompson and husband Charles, of Skiatook, Oklahoma Perry Stewart, of Collinsville, Oklahoma Tom Stewart and wife Carol, of Collinsville, Oklahoma One grandson; Billy Sam, of Skiatook, Oklahoma Sister; Eunice Eubank, of Tulsa, Oklahoma Brother-in-law; Clark Schilling and wife Connie, of Owasso, Oklahoma He was preceded in death by his wife, Carolyn Stewart, and brother, Charles Stockholm. Private family disposition will be held at a later date. Cremation arrangements were entrusted to Mowery Funeral Service of Owasso. www.moweryfs.com

The family of William Perry Stewart created this Life Tributes page to make it easy to share your memories.

Send flowers to the Stewart family.