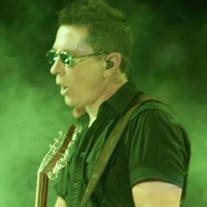 William Patrick “Pat” Talbot was born March 17, 1967, in Tulsa, Oklahoma, to Billy Howard and Sharon Ann Friend Talbot. He died Saturday, August 3, 2019, in Owasso, Oklahoma, at the age of 52 after a courageous battle with ALS, or Lou Gehrig’s disease. Pat completed his secondary education in Broken Arrow, Oklahoma, and graduated with the Broken Arrow High School Class of 1985. He continued his education at Oklahoma State University in Stillwater, Oklahoma, where he earned his bachelor’s degree in business management. Pat was married December 2, 1995, in Tulsa, Oklahoma, to Michelle Loveless. He began his working career with Southwestern Bell before joining Cisco Systems in Tulsa as a business development manager. He was a faithful active member of Rejoice Church in Owasso. Pat enjoyed a variety of pastimes, including a passion for soccer. He was also an accomplished guitarist, playing in the church band. He was a loyal and true Cowboy and was an avid Oklahoma State University fan. A loving father and husband, those family members Pat leaves behind who hold many cherished memories include: His wife; Michelle, of the home Two daughters; Mackenzie Talbot and Emily Talbot, of Owasso Brother and sister-in-law; Michael and Rainey Talbot, of Owasso Parents; Bill and Sharon Talbot, of Broken Arrow, Oklahoma And a host of nieces, nephews, other relatives and friends. He was preceded in death by his maternal and paternal grandparents and his aunt, Mary Hartness. Visitation will be held from 4:00 p.m. to 8:00 p.m. Thursday, August 8, 2019, at Mowery Funeral Service in Owasso. Funeral service will be held 10:00 a.m. Friday, August 9, 2019, at Rejoice Church in Owasso with Pastor Casey Cariker officiating. The family has honored Pat’s wishes of cremation following the service. The family requests memorial contributions be made to the Muscular Dystrophy Association at https://mda.donordrive.com/index.cfm?fuseaction=donordrive.personalcampaignparticipantID=20609. Arrangements and services were entrusted to Mowery Funeral Service of Owasso. www.moweryfs.com

The family of William Patrick "Pat" Talbot created this Life Tributes page to make it easy to share your memories.

Send flowers to the Talbot family.