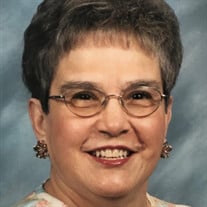 Fabiola “Yola” Morgans was born January 15, 1931, in Albuquerque, New Mexico, to Julian Chavez and Eloisa (Castillo) Chavez. She died Sunday, March 7, 2021, at her home in Collinsville, Oklahoma, at the age of 90 years. Yola was raised and educated in Albuquerque and graduated with the St. Mary’s High School Class of 1949. She was married on May 22, 1954 in Albuquerque to Bobby Lee Morgans. Yola spent most of her working life in the home raising her 3 children. She was a faithful member of St. Henry Catholic Church in Owasso for over 15 years, and was also active in missions with St. Therese Catholic Church in Collinsville, where she traveled to Guatemala with Bob and helped in the construction of a hospital. In her spare time, Yola enjoyed a variety of pastimes such as crafting, sewing, cooking, and traveling. Those she leaves behind who hold many cherished memories include: Her Husband; Bobby Morgans 3 Children; Thomas Morgans Rod Morgans and wife Cindy Anita Kanipe and husband Mark Sister; Tani Trujillo She was preceded in death by her parents, Julian and Eloisa, 2 brothers, Ted and Paul, 2 sisters, Delores and Susie, and 1 grandson, Heath. Visitation will be held from 5:00 p.m. to 7:00 p.m. with a Rosary starting at 7:00 p.m. on Wednesday, March 10, 2021 at St. Henry Catholic Church in Owasso. A funeral service will be held 2:00 p.m. on Thursday, March 11, 2021 at St. Henry Catholic Church in Owasso with Father Richard Bradley officiating.

The family of Yola Morgans created this Life Tributes page to make it easy to share your memories.

Send flowers to the Morgans family.