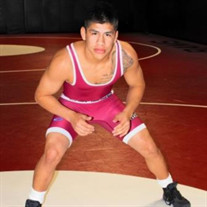 Ezekiel Lee Washington, 20, passed away Sunday, April 4, 2021 in Chattanooga, Tennessee. He was born February 2, 2001 in Tulsa, Oklahoma and was the son of Joseph and Sandra Washington. Zeke’s mother passed away December 18, 2020. He is survived by his father, one brother, Jeremy Miller, wife Patsy; six sisters Laschia Washington; Chantel Dariano; Maria Washington; Pattie Jones, husband Blake; Alexis Willis; Alexis Washington; several nieces and nephews; and many other family members whom he loved deeply. Family meant everything to Zeke. He was a caring and playful son, brother, uncle, nephew and cousin. While he would have a quiet and calm disposition, he was listening and observing his surroundings. His smile lit up a room. Others couldn’t help but to smile with him. His family will always remember him trying out his wrestling moves on his dad and even shadow wrestling as they moved into their Owasso home. Zeke graduated from Owasso High School in 2019 where he was a two-time state runner up in 6A wrestling. During Zeke’s senior year, he signed with the Chattanooga Mocs wrestling team at the University of Tennessee at Chattanooga. After continuing to college, Zeke looked forward to coming home and reconnecting with his Owasso Rams. He was always grateful for the great role models who coached and supported him. Zeke could never get enough of wrestling. When he wasn’t on the mats, he was watching others compete or was working out preparing for his next tournament. Many summers were spent assisting in coaching others. He is already missed dearly by family, friends and others who knew him. Many were so proud of Zeke’s accomplishments and looked forward to watching him continue his dream of wrestling in college. Zeke’s family wants to thank their family, friends, and the community for the out-pouring of love and support. In lieu of flowers, the family asks for donations to be made to the Owasso High School Wrestling Booster Club. A public visitation will be Sunday, April 11th at 2:00-5:00 pm at Mowery Funeral Home in Owasso, OK. Services will be Monday, April 12th at the Owasso High School Gym at 4 pm. The family asks for attendees to wear a mask.

Ezekiel Lee Washington, 20, passed away Sunday, April 4, 2021 in Chattanooga, Tennessee. He was born February 2, 2001 in Tulsa, Oklahoma and was the son of Joseph and Sandra Washington. Zeke&#8217;s mother passed away December 18, 2020. He is... View Obituary & Service Information

The family of Zeke Washington created this Life Tributes page to make it easy to share your memories.

Send flowers to the Washington family.